Writer and activist Mandy Harris Williams urges readers to examine our current ways of celebrating and honoring Black History Month through a lens of intersectionality.

Carter G. Woodson, who created and initiated the first Negro History Week in 1926 would probably find our approach to it’s celebration a bit cringe. By the 1930’s, he was weary of its commercialization and trivialization. He pressed for schools to extend this study beyond the week, making calls throughout his lifetime for its extension to a month, and later, a Negro History Year. In the 1960’s, the Black History Intellectual Movement became a vertical within a larger set of demands for equality. Not only should Black history be taught as American history—a distinction that was close to Woodson’s heart as he chose February because of both Frederick Douglass’ birthday but also Abraham Lincoln’s— but it should feed into the work that was being done in the present. By the end of the decade, students at increasingly integrated universities had drawn energy and insight from the Civil Rights and Black Power movements to petition for the establishment of African American Studies programs, with the first one established in 1968 at San Francisco State College. To be clear then, throughout it’s inception and its celebration, the movement to acknowledge, integrate, and popularize Black History (and its month) has never been merely about the history, but the historiography. How are we talking about this history and towards what ends?

Black History Month, then, should never exist as a mere occasion to tout Civil Rights advances, but, more importantly, and more impactfully, to consider the state of that history’s retelling in contemporary society, education, and politics. Today’s Black History landscape is troubling. In the last two years, 7 states have banned Critical Race Theory. In an additional 16 states, a possible ban is currently in progress. While CRT and Black History are not the same study, specifics are of lesser consequence than how they are represented and regulated. In a moment where our nation is deeply divided over racial politics, many conservative lawmakers have misrepresented CRT to silence dialogues about race, and more specifically, anti-racism. They’ve taken to CRT  as a catch all to describe growing critiques of the state’s interaction with it’s Black Citizens, critiques of policing and the justice system, but also our economic and social systems, and day to day actions. CRT was initially devised as a focus of Critical Legal Studies, which focuses on how diverse social positions interact with a supposedly neutral legal system. It was intended and for most of its history, practiced as a study of the ways in which U.S. laws create unequal outcomes for different races and perpetuate racism. In current iterations, however, the fervor against CRT focuses on protecting [white] students from studies of race that might make them feel uncomfortable, and at worst, responsible.

As queer people celebrating Black History Month, we might feel inclined towards an intersectional identity focus: regailing our queer Black ancestors and the struggles endured, and the ways they nobly fought for us to have respect, recognition, rights and protections, or even just a decent standard of life. This is important, but it is simply not enough. We must consider this history as it parallels contemporary experience.  As we consider these trailblazers, Marsha P. Johnson, Audre Lorde, and James Baldwin, to name a few, we cannot only look at their passion and vigor, but also consider contemporary contexts: would Marsha P. Johnson have experienced more legal protection and civil rights today than she did when she lived? Would she have experienced any less brutality at the hands of the police? Are sex workers any more safe now than they were in the 1960s? How do today’s rates of homelessness among queer people compare to those rates 50 years ago? Indeed, truly celebrating this month, with fidelity to its origin will require more than just layering demographics—it will require reminding ourselves just how intersectional our struggles are: racism, heteropatriarchy, police brutality, and economic justice are all connected. 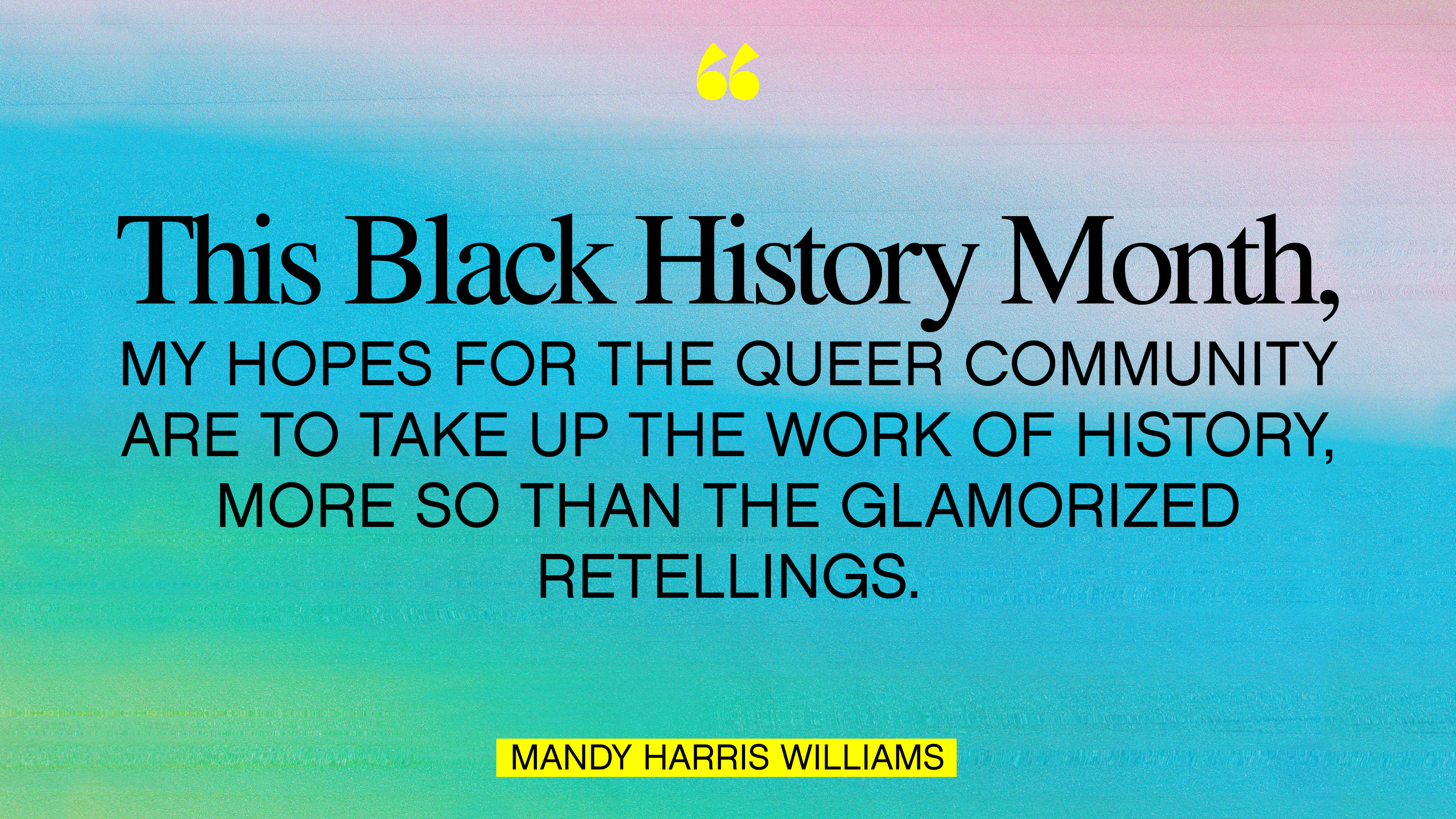 Black History Month as it is celebrated today is akin to a highlights reel—an all too frequently facile collection of heroic tales and rare achievements. This month, we’ll enjoy and glean inspiration from stories of Black queer people who rightly deserve their recognition, but a more ambitious historical practice, one closer to the intention of Woodson and the many people who supported and continued the work of Black History advocacy, would be to unpack how their efforts have been accomplished, or not, and organize around what we can do to continue that work.

In a mass media and social media age, Black people, queer people, and those of us who are both, have too frequently been offered representation when what we need is wide reaching civil rights and protection. Being recognized in media and public life offers us hopeful examples for achievement that does not disregard our identity. Seeing queer livelihoods can serve as guidance for so many who do not have queer exemplars in their surroundings. At best, our visibility can combat the depression and ostracization of feeling alone or unviable and untenable. However, we have yet to achieve many of the aims our ancestors fought for, and this coupling of increased visibility and insufficient social and civil protection can, in fact, create more vulnerable circumstances. Our recognition is no longer enough: perhaps we have outgrown, “we’re here, we’re queer.” Perhaps it is time to move from a focus on our presence to a focus on our precarity. Rather than passive observers of what occurred in the past, we have the opportunity, not just this month, but every day of our lives, to continue queer Black intellectual and protest legacies, to continue their struggle, to update and advance these struggles and discourses.

This Black History Month, my hopes for the queer community are to take up the work of history, more so than the glamorized retellings—to investigate what our queer Black ancestors had hoped to see by this time, and realign our individual and community actions to move closer to those goals. I hope that we look to figures like Martin Luther King Jr. who was assassinated as he was beginning to articulate how racial equality intersects with economic justice and anti-imperialism, and recommit to our analysis of how cisheteropatriarchy intersects with racism, nationalism and capitalism. I hope that we reinvigorate our activistic sensibilities and support one another: no more siloed struggles. I hope that more than just telling stories of struggles of the past, that we take up its legacy. If I can urge one specific action, it would be to come out—again—this time, as anti-racist, and to honor Black History in the way that we move forward, now and tomorrow.